Home All articles China Is Sitting On $3 Trillion In Currency Reserves, But Is That...
Facebook
Twitter
Linkedin

With questions mounting about the health of China’s banking system, one figure in the spotlight is the adequacy of China’s foreign currency reserves. Since the government owns nearly all the banks, the Chinese government is essentially on the hook for the debts of the entire banking system. As a result, China’s official reserves are a hedge not only for country’s currency, but for its entire financial system.

China has long been the world’s currency hoarding champion, consistently holding more than $3 trillion in reserves since 2010 (the latest figure is $3.133 trillion). That may sound like a lot of money, and it is. But in comparison to China’s enormous economy, that’s now less than 30% of GDP.

China’s reserve position declined from 47.6% of GDP in 2010 to just 28.7% in 2017. Ironically, most of that decline is a symptom of China’s economic success. China has actually increased its reserves by 18% in U.S. dollar terms since 2010, but China’s nominal GDP has nearly doubled during the same period. 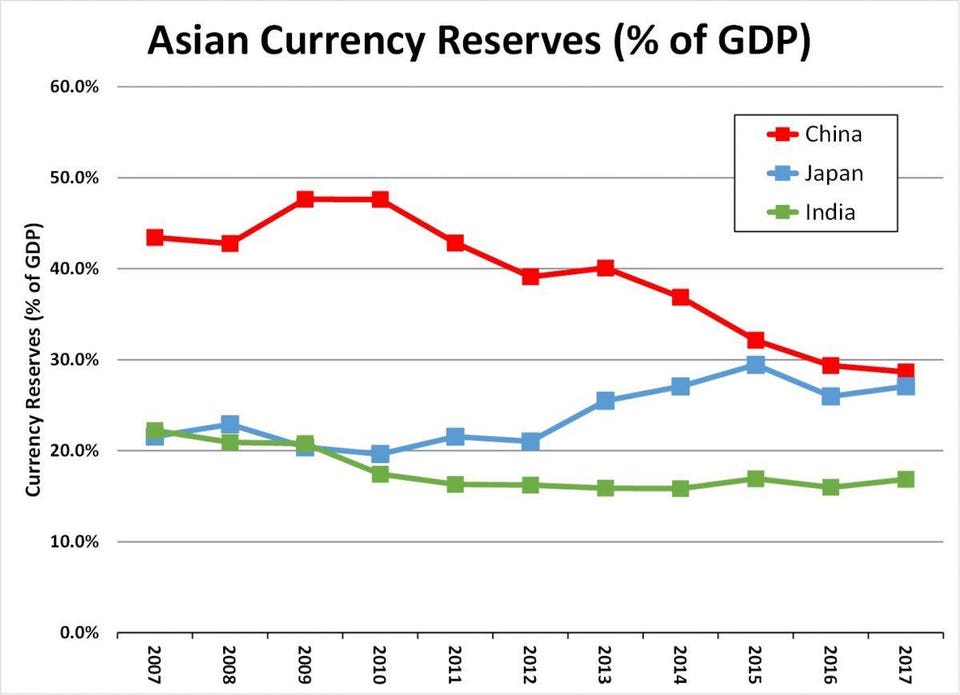 What do the reserves cover?

Under ordinary circumstances, currency reserves on the order of 25-30% of GDP would be enough to meet any contingency. When the Asian financial crisis hit South Korea in 1997, its reserves were just 3.7% of GDP. Unlike South Korea, China is at no risk of running out of reserves.

In fact, China’s reserves are more than sufficient to cover three out of four of the IMF’s tests for assessing reserve adequacy. The only IMF test that China fails is the need to cover 20% of the broad money supply (M2). At the end of 2017, China’s reserves came to only 13.1% of M2.

Ordinarily, failing the M2 test would not be considered a major problem. Among major Asian economies, South Korea and Vietnam both fail the test by margins similar to China’s. But neither South Korea nor Vietnam is in the midst of a massive credit bubble.

China is, as even the government and its leading advisors agree. China’s broad money supply has reached roughly 300% of GDP, the second-highest leverage in the world, trailing only Hong Kong, which of course is also part of China. And as shadow banking has been reined in, other bubbles are blowing.

If China were to experience currency problems, they wouldn’t take the form of a Latin American style balance of payments crisis. With a massive trade surplus of $422.5 billion in 2017, China will always have the money to pay for its imports. The China risk is a credit risk, and since the government is the ultimate holder of nearly all debt, that makes it a sovereign risk.

The Chinese government borrows very little abroad, and unlike Greece during the 2010 Euro crisis, it manages its own currency. But it may have to devalue that currency to keep the economy growing. Hemmed in by the Euro, Greece was unable to do that. China faces no such constraints.

The last major devaluation of the Chinese Yuan was on New Year’s Day, 1994. That occurred at a time when the government set exchange rates, as it set most everything else in the Chinese economy. Today’s China’s economy is much more open, and an official devaluation is much less likely.

To any ordinary person, $3 trillion sounds like an awful lot of money. But if a bubble bursts in an economy the size of China’s, the money goes fast. More to the point, China would have little incentive to defend the Yuan in the case of a burst bubble. The easiest way to deflate the (real) value of assets in China would be to just let the currency take the cut.

The Rise, Trends, and Business Models of Chinese Brands